Lustrous silverware, a literary bestseller and Australian and European art and sculpture are on the auction block at two big sales this month.

Sotheby’s Australia is offering the art and sculpture collection of the late charity queen Rae Rothfield in Melbourne on October 23.

A week later, it will hold a sale in Sydney of art and decorative art, including manuscripts from author Colleen McCulloch, along with gilt-edged English silverware.

Melbourne socialite Rothfield, who died in March, bought broadly over many decades. She was a keen supporter of Jewish causes and was also a supporter of the theatre; notably, she was an associate producer on the Broadway musical All About Me at Henry Miller’s Theatre in New York in 2010.

Her collection, which includes more than 200 pieces, is valued at up to $2 million and includes a few big names such as Brett Whiteley and Fred Williams.

The majority of her artworks are by modern artists and were acquired directly from them and from galleries rather than at auction.

Gormley was commissioned by the Perth International Arts Festival in 2003 to create works for the salt flats at remote Lake Ballard near Menzies in Western Australia.

Brett Whiteley’s oil Wendy under the Shower has the highest estimate in the sale at $350,000 to $450,000. But there are many relatively modest works by the likes of Fred Cress, Deborah Halpern, Douglas Roberts, Gabriella Simosi and Marion Borgelt, which are estimated at less than $2000 each.

Meanwhile, admirers of McCullough, who died in 2015, will no doubt follow with interest the fate of her personal manuscripts, which will be sold on October 30 at Sotheby’s mixed sale of Australian, European and Asian decorative art in Sydney.

The most important item among the McCullough material is the oldest surviving manuscript for her best-selling book The Thorn Birds. The story, set on a sprawling sheep station in the outback, is a tale of a stoic family whose daughter falls for a powerful catholic clergyman. First published in 1977, it was turned into a popular TV mini-series in 1983, starring Richard Chamberlain and Rachel Ward.

The partially annotated manuscript is expected to fetch $20,000 to $30,000. Also on offer are first drafts and notes from the author’s first novel, Tim, and the original manuscript for An Indecent Obsession, as well as for several other works. Books from the McCullough estate include two works by William Bligh: a 1790 first edition of Narrative of the Mutiny and A Voyage to the South Sea, from 1792.

As well as the author’s archive, the sale includes Asian ceramics, furniture and jade, European silver and glass and a sprinkling of paintings and prints, many of them priced below $10,000.

Standing out among the decorative art lots are several fine pieces of silver, including a silver and silver gilt figural punchbowl, 30cm in diameter, made around 1907 by London’s Goldsmiths & Silversmiths. Its sides are adorned with gilded dragons and seashells, and it stands on three dragon’s feet. The bowl was acquired in Dallas, Texas, in 2016, and has been consigned from a Melbourne collection. It has a price estimate of $40,000 to $50,000.

Carrying a similar estimate is a presentation candelabrum centrepiece, 80cm high, by Charles Boyton, London 1869. The three branches are supported by allegorical figures and the base is inscribed to Sigmond Hoffnung from the board of the Sydney Synagogue, York Street.

A late Victorian Aesthetic Movement silver tea and coffee service with a matching silver-plate tray by Walter & John Barnard, London, circa 1892, is decorated with parcel gilt scenes of birds amid foliage. It is expected to sell for $20,000 to $30,000. 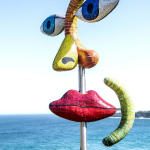 Eye candy for sale as sculptors try to break evenUncategorized