Deborah Halpern is one of Australia’s most celebrated sculptors, known for her wildly colourful mosaic work.

Creator of many of Melbourne’s most loved public sculptures, Halpern’s works exude an innate vitality and alluring simplicity. Spontaneous in form, her creatures are painted in a style that recalls visions of Gaudi, Picasso and the playful surrealism of French sculptor Niki de Saint Phalle, yet all have become distinctly Halpernesque in their ability to delight and surprise.

Halpern is a multi-disciplinary artist who explores the mediums of sculpture, painting, pottery, glass blowing and printmaking. Her work can be exuberant and whimsical but is also imbued with a deep artistry. 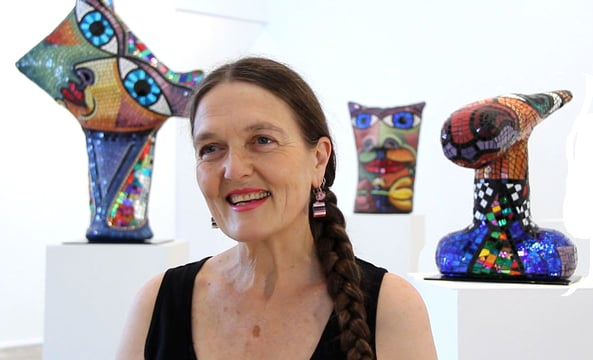 Over her 33-year career Halpern has produced an extraordinary body of work and through her numerous public sculptures has become well known and respected within the community.

One of Halpern’s biggest and world-renowned sculptures, Angel, stood in the moat of the National Gallery of Victoria for many years before it was moved to its current location on the bank of the Yarra River at Birrarung Marr, besides Federation Square. 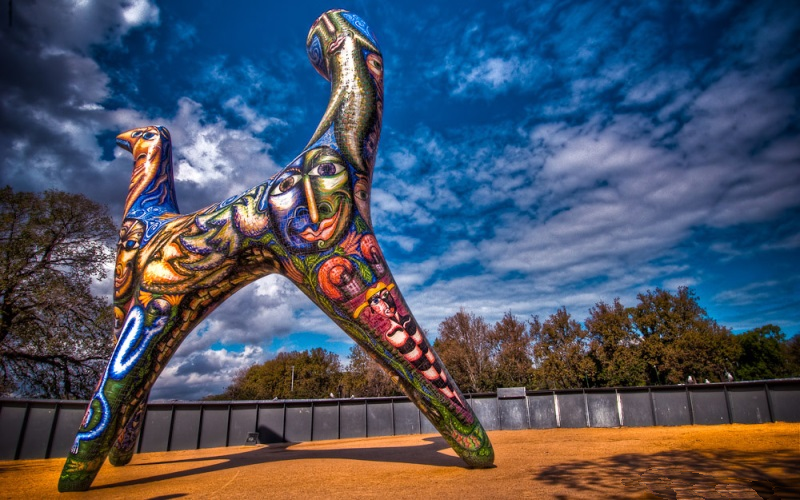 Angel was commissioned by the National Gallery of Victoria (NGV) and was completed in 1989. The sculpture stood in front of the NGV for 17 years and was created to Melbourne’s “wild, whimsical and colourful” identity. Angel now lives in Birrarung Marr in Melbourne’s CBD.

Ophelia was chosen as ‘the Face of Melbourne’ by Tourism Victoria in 1996. The culpture was inspired by the character from Hamlet, full of both love and sadness. The cousin of Angel, together they bring life and humanity to the Yarra River in Melbourne’s CBD.

In her particular world view, Deborah Halpern was greatly influenced by her parents, artists Sylvia and Artek Halpern, who would often speak to Deborah of the ‘brotherhood of man’, and Halpern came to see the planet as her family.

As a teenager she was increasingly aware of the paradoxes and injustices of the world. She donated as much as possible to the Guide Dogs Association, Green Peace and Amnesty International, but felt that $10 per week wasn’t making enough of a difference. Deborah thought she could make a bigger contribution, so she made that challenge part of her future.

Halpern began her artistic career training as an apprentice in ceramic works in 1976. In her mid-twenties, she was introduced to members of the Hunger Project, a not-for-profit organisation aiming to make a fundamental impact in the world’s most poverty-stricken areas. The group had a policy of instigating programs only upon the invitation of communities to do so, and of initiating conversations with members of those communities to directly address their needs. The people behind the Hunger Project had been a part of the Landmark Forum, now a widely-known motivational seminar series operating worldwide, and in the mid-1980s Halpern decided to attend.

A sculptor and a potter by trade, Deborah Halpern had been commissioned in 1987 by the National Gallery of Victoria and the Australian Bicentennial Authority to create a sculpture for the south moat of the NGV’s St Kilda Road site. She was intimidated by the scale of the project, and found the Forum helped her to realise her potential. With an original grant of $25,000, the sculpture, Angel, became a far bigger project than was originally intended, and Halpern had to meet costs by fundraising.

Empowered by her success with Angel, Halpern pledged $100,000 to the Hunger Project within one year. She and her then husband Malcolm took on as many commissions as possible until the money had been raised.

Today, with her sculptural pieces fetching handsome sums, Halpern donates $5,000 to $25,000 annually to any number of organisations. She sees the $100,000 gift as having been a one-off challenge, and now maintains a trust account. Between 10 May and 23 July 2006, the Ian Potter Centre at the NGV held Angel, an exhibition of Halpern’s work, to coincide with the relocation of that original public sculpture to the Yarra bank at Birrarung Marr.

Annually, Deborah donates money and time to many different causes.

Portal to Another Time and Place

Portal to Another Time and Place was created in 2004 for the Lempriere Award held in the grounds of Werribee Mansion. According to Halpern, “to see something whimsical, surprising and delightful in the landscape is always inspiring”. The sculpture belongs to a private collection.

The Queen of the Shire